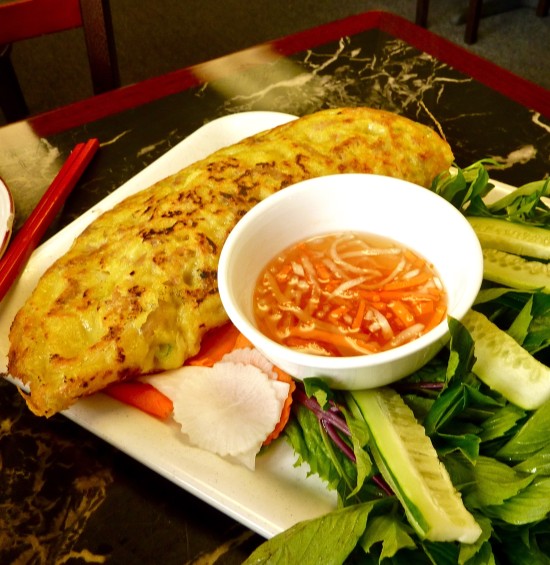 It’s not exactly a secret that Portland, Oregon has become one of America’s premiere food cities, known as it is for its fresh, local, seasonal, and largely organic cuisine. So, when I made a quick pre-Christmas trip there to visit my fellow foodie friend, Adele, I knew I was in store for some wonderful eating.  I was not disappointed. I was barely off the plane when Adele whisked me to Tan Tan, a friendly, family-run Vietnamese joint in the close-in western suburb of Beaverton. This is an easy-to-love restaurant, serving really fresh food, casual and inexpensive.  Reviewers on Yelp rave about the bahn mi sandwiches, but I found the more unusual Vietnamese crepe to be completely satisfying, and not to forget the spring roll. Most spring rolls don’t get me excited, but this vegan version, stuffed with seitan, tofu, and the usual rice noodles and veggies, delivered so much clean flavor you really didn’t even need to dip it in the rich peanut sauce. Pho, the much loved Vietnamese noodle soup, is  another specialty here.

Several factors have contributed to Portland’s rise as a food city. The relatively mild climate and proximity to the fertile Willamette and Hood River vallies would be two, but also there is Portland’s comparatively low cost of living which has attracted young chefs, because the cost of opening a food business is a fraction of what it would be in Manhattan, San Francisco or most big cities. Diners benefit as well, as prices nearly everywhere seem to be downright reasonable compared to the Bay Area (and Oregonians love to rub in the fact that there’s no sales tax). It would take a couple weeks of eating and food shopping in and around Portland to even skim the surface of its food culture, but in a few days, I was able to squeeze in quite a bit.  My report is after the jump.

Photos: From the top–1) Vietnamese Crepe with dipping sauce at Tan Tan in Beaverton, 2) Food carts in the S.W. Alder area of downtown Portland, and click on this video for a humorous, but informative report on Portland’s food cart scene. , 3) Retail store at Bob’s Red Mill, 4) Vegetarian Spring roll at Tan Tan contained both seitan and tofu, really yummy!

Although there’s lots that’s new about Portland’s food scene, several spots which have been around for a while, warrant a visit. Not to be missed is Bob’s Red Mill in nearby Milwaukie, which since 1978 has been selling natural and organic whole grain products, more and more of which are gluten free. Visit their impressive retail store and restaurant and take a tour of the mill where everything is stone ground. Of course, you will find Bob’s Red Mill products in most natural food stores and even many supermarkets nationwide, and online. While not exclusively a foodie destination, Powell’s City of Books on Burnside Avenue in downtown Portland has one of the largest selections of food-related books anywhere, and a major online presence as well. Farmer’s markets, too have long been a major force in the Portland food scene, and I recommend the Saturday morning market in the park at Portland State University between S.W. Hall and S.W. Montgomery streets in the downtown area. This market is currently closed for the winter and will reopen in March.

You get a sense of the local, independent nature of Portland’s food culture when you visit any one of twelve New Seasons Markets scattered around the Portland area. While Whole Foods has bought out or driven out of business local natural food stores in many areas, New Seasons, founded only in 1999, completely dominates that market segment in Portland. Visit one of their stores, and you’ll understand why. Another area where Portland clearly leads is their food cart culture.  While San Francisco has dozens of food trucks, Portland seems to have hundreds of food carts, trailer-like places where food is cooked and sold. I’ve yet to really dip into this part of Portland’s food scene, but the low cost of entry makes it possible for imaginative chefs to get into the business on a relative shoe string. These carts are sprinkled seemingly all over town, but there’s a large group of them around S. W. Alder between 9th and 11th Avenues, downtown.

As for restaurants, numerous blogs, such as Portland Monthly’s Eat Beat, will keep you up to date on the city’s ever-growing restaurant scene, so I’ll just comment on a few places I was able to check out. Tan Tan, mentioned above and in the photo captions was perhaps most memorable because the food so surpassed one’s expectations for such a moderately-priced venue. Once lowly ramen, gets a respectful upgrade at Boke, 1028 S.E. Water Street, and I enjoyed it so much that I’ll be posting about ramen here soon. There are several well thought of vegan restaurants in Portland, and Adele and I tried Portobello, 1125 S.E. Division St., where we shared a meal of  roasted beets on cashew cheese as an appetizer, a deep dish pizza with a gluten-free, polenta-like crust, seitan medallions and a pear tart with house made coconut ice cream, a satisfying meal in a pleasant, contemporary environment. Although I didn’t have time to try it, Natural Selection, new this year, seems to be regarded as Portland’s best vegan restaurant. Finally, I highly recommend Tabla, 200 N.E. 28th Avenue, a  Mediterranean bistro where three impeccably cooked and presented courses can be had for $28. When I’m having a mellow evening out with friends, I don’t take notes and I don’t photograph, so I can’t remember  everything we ate at Tabla, but I do recall having one of the most precisely-cooked and clean tasting fish dishes I’ve had in a long time. No doubt, I’ll be returning to Portland before long–there’s so much to see, to do, and most of all, to eat. Anyone who lives in Portland and wants to make additions and corrections to this brief report–please have at it in the comments area!

Whole grain breakfast and lunch orders wait to be picked up at the kitchen of Bob's Red Mill retail store. 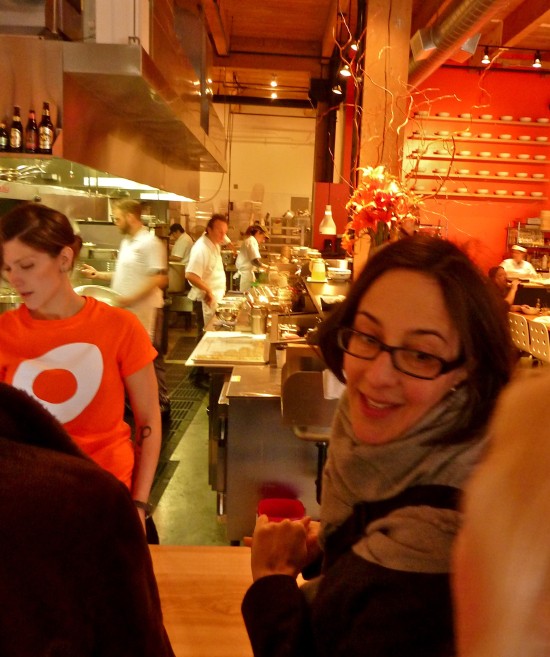 Waiting to order bowls of steamy ramen noodles at Boke.

Baked goods which are both vegan and gluten-free from Petunia's Pies and Pastries, Portland State University (PSU) Farmer's Market.

One of the most satisfying vegan and gluten free cookies ever, based on corn flour and almond flour and with peanuts and chocolate chips, probably sweetened with brown sugar, also made by Petunia's.

Not to be missed in Portland is Powell's City of Books in the Pearl District, with a dizzying selection of cookbooks, and most other categories as well. 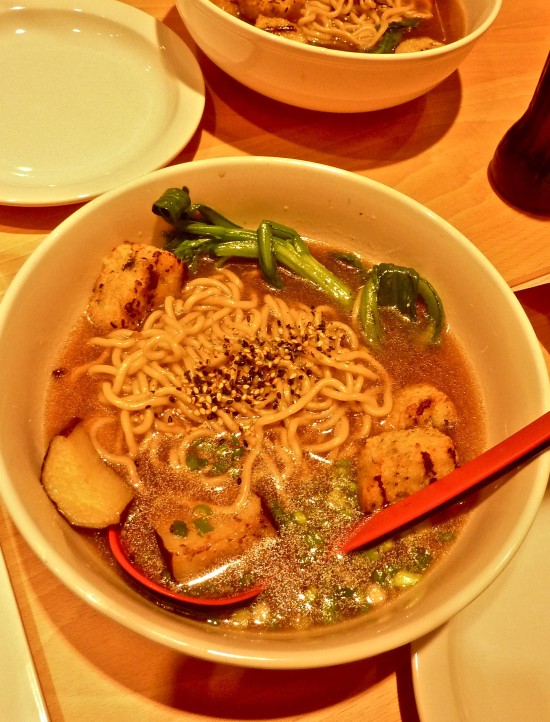 Benessere offers dozens and dozens of quality oils and vinegars, and best of all, you can help yourself to a taste.

Spanakopita, dolmas, among other goodies in the deli department at New Seasons Market.

At the PSU Saturday farmer's market, a display of Belgian endive's various stages of growth. Sunset Lane Farm produces this labor-intensive vegetable in the Willamette Valley.

Fresh cranberries were all sold out by Thanksgiving, but you could buy cranberry juice blends grown and bottled by Vincent Family Cranberries, on the south Oregon coast. Oregon and Washington are important producers of cranberries, after Wisconsin and Massachusetts. 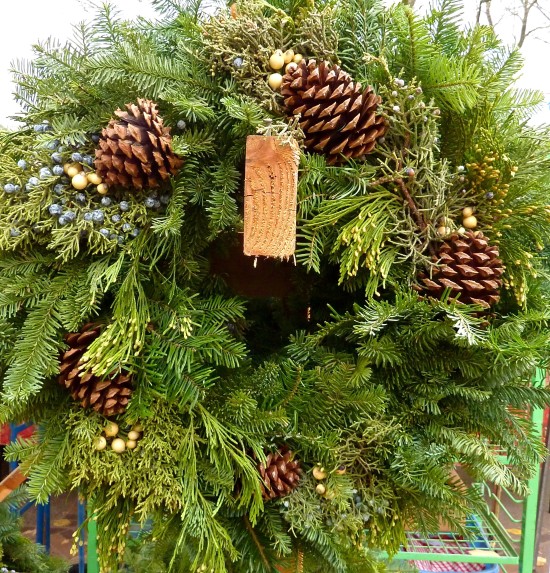 Tis the season... conifers grow abundantly in the Pacific Northwest.

Oregon is known for fabulous mushrooms, both foraged and cultivated. 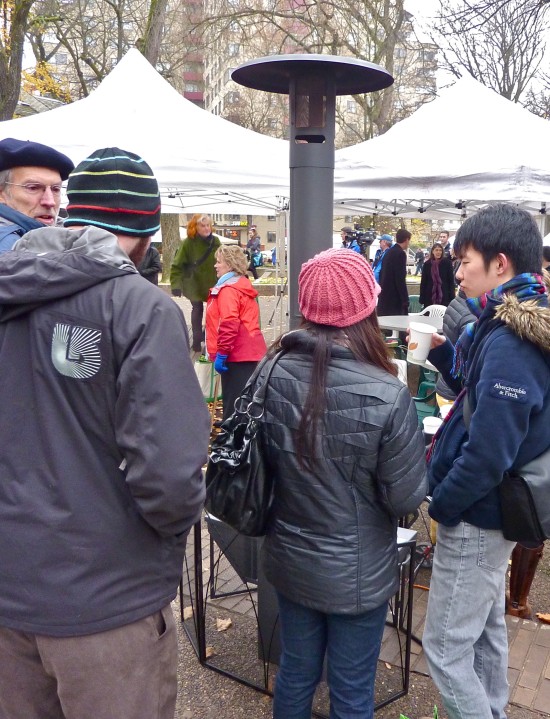 Huddling around a stove at the Portland State University market. It was a damp 30˚ F on Saturday, December 15th, the penultimate market of 2011.