While pickling can take weeks, if not months, it’s also true that light, crisp pickles can be made in hours. You could eat these Chinese-inspired pickled veggies after only a few hours in the brine, but I think you’ll enjoy them more if you let them rest over night. Pickling, of course, refers to the process of preserving food in salt or acidic brine, thus achieving a pH of less than 4.6, enough to kill most bacteria. Before the invention of canning, freezing and refrigeration, pickling allowed people who lived in cold climates to enjoy vegetables throughout the winter. And pickling is still a great way to prepare vegetables, as once they’re made, they rest in your fridge, always ready to eat. Truly, a healthy fast food.

If you’re worried about the salt content in homemade pickles, keep a couple of things in mind: salt is necessary as a preservative and for that traditional “pickled” taste. Also remember that much of the salt stays in the brine (which you won’t be eating), and that pickles are meant to be eaten in small quantities. They are always a condiment, never the main event. Rinse pickles under running water before eating, if you want to further reduce their saltiness. If covered by brine, these pickles will keep safely in the fridge for 2-3 weeks.

This is a basic recipe. Vary it by using other seasonal vegetables, heat it up with pepper of some kind, if you like, or add herbs and spices. Enjoy with rice or noodles, and pickles are a great addition to most any sandwich. Recipe, after the jump.

Veggies I used in these pickles: daikon, carrot, cucumber, ginger and garlic. You could also pickle celery, turnip, bell peppers or other seasonal vegetables in the same way.

1 large cucumber, cut in half, seeded and cut into diagonal slices

2. Cover with a plate, and put a medium-sized bowl filled with water on the plate, to weigh the veggies down. Keep the veggies weighted for 2-3 hours.

3. In another bowl, mix together the brown rice vinegar, the rice syrup and the salt. Uncover the veggies and pour in this brine mixture. Cover with plate and weight as before.

4. When the brine completely covers the veggies, you no longer need to keep the veggies weighed down. Let the veggies sit for 24 hours. Refrigerate if the weather is hot.

5. After 24 hours, the pickles are ready. Take out only those you will serve for each meal and drain well.  Rinse, if they seem too salty. I like to squeeze on a little fresh lemon juice at the last minute to brighten the flavor (if your lemon is juicy, a quarter lemon will be enough).  Keep the remaining pickles refrigerated (still covered in the brine). 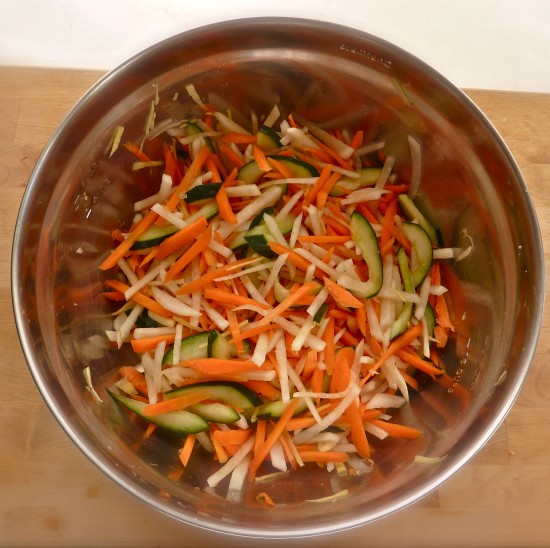 The veggies, after 3 hours of salting and pressing.