Perhaps it’s only a sign that I’m getting older, but I’ve been thinking more and more about longevity. It’s not so much that I fear death (although who of us can say we don’t fear it at all?), as it is that I’d kind of like to know how the remaining years of my life will unfold. I accept that few of us can know the future, but wouldn’t it be good to have a positive vision for the final decades of our lives?

So often, old age is seen only as a time of decline, depression and loneliness. Call me a pollyanna if you like, but that’s not how I plan to spend my final years. Yesterday, I read a story about the death of Dr. Leila Denmark at age 114, a remarkable life span. But what really caught my attention was this detail in her obituary: she was a pediatrician who kept office hours five days a week into her 103rd year. And recently I’ve been dipping into John Robbins’ study of some of the world’s healthiest and longest-lived peoples, Healthy At 100. It’s an important book wherein Robbins brings together scientific studies of communities where people live much longer and healthier than most of us, and I’ll have more to say about it in a later post.

Today however, I want to salute longevity much closer to home: that of my own mother. I’ve just returned from a quick trip too Minnesota where my family celebrated my mother’s 90th birthday. It was a great occasion, not only because of my mother’s age, but because she continues to be so alive. Although my mother’s health isn’t perfect, 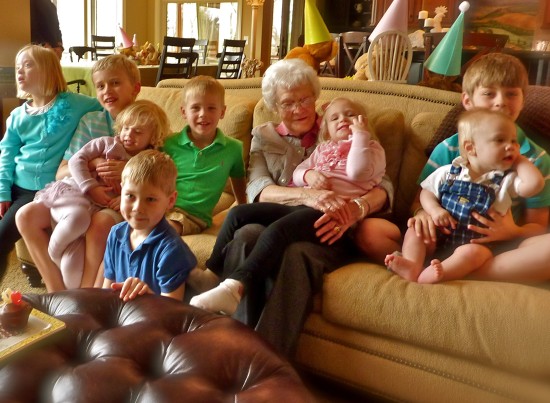 END_OF_DOCUMENT_TOKEN_TO_BE_REPLACED

If you’ve ever pursued an interest in vegetarian cooking, it’s likely you’ve been drawn to Indian food. India, it seems to me, is home to the world’s most sophisticated and highly developed vegetarian cuisine. And no wonder, given India’s ancient culture, and its hundreds of millions of vegetarians. Although I once took cooking classes from two Indian women, my knowledge of Indian cooking is pretty superficial, coming mostly from cookbooks and an occasional restaurant meal. Nevertheless, I can’t keep myself from dabbling. Currently, I’m taking inspiration from The Art of Indian Vegetarian Cooking, an 800-page tome which seems to me to be the most comprehensive Indian vegetarian cookbook written for American readers. The author, Yamuna Devi, is an American who was known as Joan Campanella before she became a disciple of Srila Prabhupada and began her life-long study of India’s spirituality and cuisine. This is a serious, but very usable book, with more than 500 recipes, and no pretty pictures. It’s a book I’ll refer to time and again as I share with you my interest in Indian cooking. Today’s recipe is only loosely based on one of Devi’s, but I expect it will be the first of many to be inspired by this stimulating book. My recipe for curried red kidney beans with roasted butternut squash is after the jump. 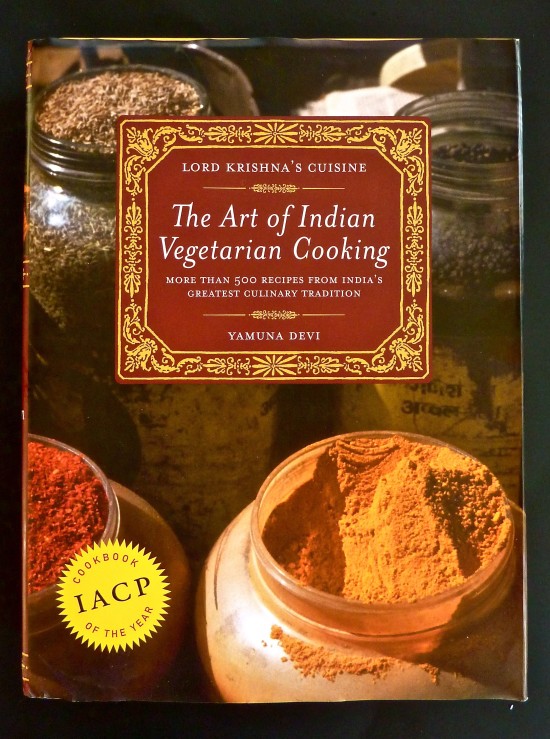 END_OF_DOCUMENT_TOKEN_TO_BE_REPLACED

If you love Japanese food but think it too mysterious and intimidating to cook at home, or if you just want to deepen your knowledge of this sophisticated cuisine, Elizabeth Andoh is someone you’ll want to get to know. Andoh, born into an American family of doctors, went to Japan on a fellowship in the late sixties, fell in love with the food and culture and married into a Japanese family. Having formally studied Japanese language and cooking, she is the author of five cookbooks. For thirty years she was Gourmet magazine’s correspondent in Japan, and is widely regarded as the go-to English language authority on Japanese food. If there are any books better than Washoku (from 2005), and Kansha (published last year) to give you a grounding in Japanese cuisine, I don’t know what they would be. Published by Berkeley’s Ten Speed Press, both are handsome books, with spare, but beautifully composed, naturally lit photographs by Leigh Beisch. While each book contains one hundred or more carefully written and well tested recipes, Andoh’s approach is not only to transmit recipes, but to lead the reader step-by-step to an understanding of cooking which is so practical and insightful that it will be useful no matter what style of cooking you pursue.

Washoku, which she translates as “harmony of food,” opens with an explanation of the traditional ways of food preparation in Japan, including the ancient five “principles” which have long been an important underpinning of Japanese thought. Want to make sure your meal is balanced?  Does it include five colors, five flavors, five cooking methods?  She points out that these rules aren’t meant to be interpreted rigidly, but they do give you a viewpoint from which to evaluate your cooking and your thinking.

She includes a detailed explanation of the Japanese pantry including beans, flour, fish, herbs, miso, mushrooms, pickles, noodles, rice, tea and much more.  This section alone is worth the price of the book. Recipe sections cover everything from stocks to noodles, to meat and poultry, to tofu and eggs, as well as dessert. END_OF_DOCUMENT_TOKEN_TO_BE_REPLACED

Perhaps it is just a sign that I’m getting older, but recently longevity interests me more and more! In this TED talk, National Geographic writer and author of the book “Blue Zones,” Dan Buettner talks about three communities where people live much longer than the average in the U.S. The first is in the highlands of the Italian island of Sardinia where the elderly are held in high regard.  The second is in the northern part of the main island of Okinawa, Japan where people have one-sixth the rate of cardio-vascular disease that we do. The third is actually in the U.S., the Loma Linda community of Seventh Day Adventists in Southern California where men live on average 11 years longer then other American men.  These communities have much in common, a largely plant-based diet for one thing. Exercise, particularly walking, tends to be built into their lives. Family and especially, friendship come first.  One circle of five women friends in Okinawa have known each other for 97 years, and their average age is 102. They stay active, retirement is mostly unknown.  One 97-year old man in the Loma Linda community still performs 20 open-heart surgeries a month. Also important is knowing why you are alive: having a reason to get up in the morning.  It’s an inspiring talk which covers some of the same territory as John Robbins does in, “Healthy at 100,” a book I’ll discuss in a later post.

My well-worn and food-stained copy of Lima Ohsawa's seminal 1974 book, The Art of Just Cooking. **

I don’t write much about theory, or use the word “macrobiotic” very much on this blog because I think sometimes words and theory get in the way of simple, practical things we can do to deepen our experience of life. And maybe, because cooking, not theory is my strong point. However, there’s a lot of information out there if you do want to deepen your understanding of  yin and yang and the universal but Eastern-inspired way of thought which lies beyond. The best list of macrobiotic resources I’ve seen so far was put together by a site called MedicalCodingCertification.Com. Click here to access their links to 50 sites which approach the subject in varied ways. Like most lists, it’s not completely inclusive, but certainly a good place to start.

**This is one of a number of influential books which brought holistic, Asian ways of seeing food, energy, and indeed all of life, to a Western audience. I intend to reference this wonderful book and feature recipes from it in future posts.  Unfortunately, it is out of print, but used copies can be found on Amazon.

When Alexandra Carmichael began cooking with her daughters as part of home schooling, she was pleased that Megan, 4 1/2, and Samantha, 7 1/2, turned out to be enthusiastic cooks.  And I’m gratified that they are using recipes from this blog as one of their main inspirations. Alexandra also draws from her favorite cookbook, Cynthia Lair’s “Feeding the Whole Family” and from Lair’s website, Cookus Interruptus, which features recipes and over 100 often amusing cooking videos. They’ve tackled recipes for white bean and mushroom minestrone, cranberry walnut muffins and tempeh stroganoff, among lots of others. To see more photos of what this threesome is up to, check out Alexandra’s blog. You’ll also see  her comments on a variety of challenges life poses. Well worth a look.

Update (June 22nd): Samantha Carmichael came to help us prep vegetables yesterday in the kitchen of First Baptist Church for our Monday Night Dinner in Palo Alto. And a great and enthusiastic worker she proved to be. Dad, Daniel, looks on.

“When you eat, eat slowly and listen to your body. Let your stomach tell you when to stop, not your eyes or your tongue.”

–from “Buddha’s Little Instruction Book,” by Jack Kornfield.  Kornfield is one of the best-known teachers of Buddhism in the U.S. and a founder of the Spirit Rock Center, Woodacre, Marin County.  Click here to participate with him in a brief guided meditation.

I don’t know cookbook author and activist Bryant Terry personally, but I think he is a great ally in our movement to spread the word about healthier eating. There’s a lot that’s endearing about his 2009 cookbook “Vegan

Soul Kitchen.” For one thing, his suggestions for  music to accompany each recipe add a charming dimension I don’t think I’ve seen before in a cookbook. Most importantly, the recipes are clean, straightforward and interesting, the sort you’d actually want to cook. A link to a video of Bryant teaching one of his signature dishes and my version of his recipe for “Double Mustard Greens and Roasted Yam Soup” follow after the jump. END_OF_DOCUMENT_TOKEN_TO_BE_REPLACED 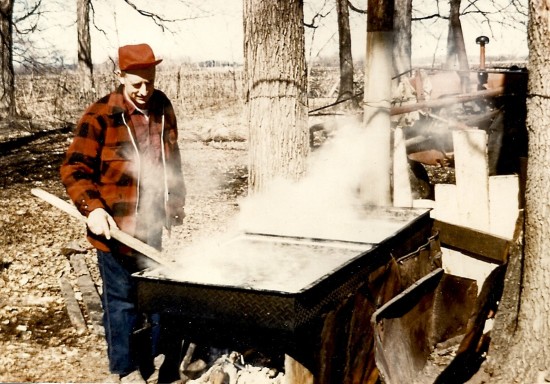 My father boiling down maple syrup in our woods, in the 1960's

WHY MAPLE SYRUP IS EXPENSIVE,  AND WHY IT’S WORTH IT

Few foods are as traditional and indigenous to North America as maple syrup. Native Americans in what is now the northeastern U.S. and southeastern Canada were making maple syrup long before Europeans arrived and by the late 17th century European settlers had already created a maple syrup industry.  Of course I knew none of this when I poured maple syrup on my pancakes as a kid, or occasionally helped my grandfather and father in gathering sap from the trees tapped in our woods. (More photos and a recipe for maple syrup gingerbread, after the jump.)

END_OF_DOCUMENT_TOKEN_TO_BE_REPLACED

When I first encountered macrobiotics, decades ago (dinosaurs still roamed the earth!) the teachers were nearly all men in dark suits. And

while they have my respect, I’m glad that’s no longer true.   People of varied styles and genders teach today, among them, Jessica Porter, a woman who obviously refuses to take herself too seriously since she’s titled her book, her web site and her blog, “The Hip Chick’s Guide to Macrobiotics.” While I haven’t dipped into her book yet, it’s apparent from her web site and blog that she’s a talented communicator. In addition to being a macrobiotic teacher, she’s also an actress, stand-up comedian and hypnotherapist specializing in smoking cessation. She has a 12-hour series of cooking classes available to purchase for download from her web site.  I enjoyed watching a recent segment she did on KGO-TV  on how “laughter can heal all ailments.” You’ll be laughing too! END_OF_DOCUMENT_TOKEN_TO_BE_REPLACED

More Photos
the MacroChef
Create a free website or blog at WordPress.com.