I’ve heard that you like corn.  Good, here’s corn times two: fresh sweet corn combined with cornmeal. Serve this as a main dish for a vegan or vegetarian holiday dinner or as a side dish for any meal.  If possible, make it soon while late season corn is still around. If you’re feeling it, you could enrich this dish by adding a couple of whisked eggs, and substituting dairy cheese for the vegan cheese. It would still be low in fat compared to conventional recipes. (By way of contrast, Food Network presenter Ina Garten’s recipe rich with eggs, milk, half and half, butter and two kinds of cheese is here.) This is really nice served with a simple fresh tomato salsa. ( Recipe after the jump) END_OF_DOCUMENT_TOKEN_TO_BE_REPLACED

Perhaps it is just a sign that I’m getting older, but recently longevity interests me more and more! In this TED talk, National Geographic writer and author of the book “Blue Zones,” Dan Buettner talks about three communities where people live much longer than the average in the U.S. The first is in the highlands of the Italian island of Sardinia where the elderly are held in high regard.  The second is in the northern part of the main island of Okinawa, Japan where people have one-sixth the rate of cardio-vascular disease that we do. The third is actually in the U.S., the Loma Linda community of Seventh Day Adventists in Southern California where men live on average 11 years longer then other American men.  These communities have much in common, a largely plant-based diet for one thing. Exercise, particularly walking, tends to be built into their lives. Family and especially, friendship come first.  One circle of five women friends in Okinawa have known each other for 97 years, and their average age is 102. They stay active, retirement is mostly unknown.  One 97-year old man in the Loma Linda community still performs 20 open-heart surgeries a month. Also important is knowing why you are alive: having a reason to get up in the morning.  It’s an inspiring talk which covers some of the same territory as John Robbins does in, “Healthy at 100,” a book I’ll discuss in a later post.

My well-worn and food-stained copy of Lima Ohsawa's seminal 1974 book, The Art of Just Cooking. **

I don’t write much about theory, or use the word “macrobiotic” very much on this blog because I think sometimes words and theory get in the way of simple, practical things we can do to deepen our experience of life. And maybe, because cooking, not theory is my strong point. However, there’s a lot of information out there if you do want to deepen your understanding of  yin and yang and the universal but Eastern-inspired way of thought which lies beyond. The best list of macrobiotic resources I’ve seen so far was put together by a site called MedicalCodingCertification.Com. Click here to access their links to 50 sites which approach the subject in varied ways. Like most lists, it’s not completely inclusive, but certainly a good place to start.

**This is one of a number of influential books which brought holistic, Asian ways of seeing food, energy, and indeed all of life, to a Western audience. I intend to reference this wonderful book and feature recipes from it in future posts.  Unfortunately, it is out of print, but used copies can be found on Amazon.

April 5, 2010 By macrochef in Food and Culture, Menu of the Week Tags: Shaker Cookery 3 Comments

The Shakers were  a pious, communal religious sect which broke off from the Quakers and thrived in 19th Century America.  They are most often remembered for their well-designed, functional and superbly-crafted furniture, but I’ve come to appreciate that they were exceptional farmers, gardeners and cooks as well. There’s ample evidence of this in the 900 recipes collected in “The Best of Shaker Cooking,” which served as inspiration for this menu. The meal started with a barley and vegetable soup accompanied by whole wheat rosemary biscuits. I hoped to convey the Shakers sense of  honestly, quality and simplicity in the main course, pictured above. The main event is a rice croquette which was made of short grain brown rice

END_OF_DOCUMENT_TOKEN_TO_BE_REPLACED

There’s neither a serious, nor a logical reason for this post, except that seeing these brightly colored eggs just made me happy. So whether you celebrate Passover or Easter or Spring Fertility Rites or no holiday at all this time of year, enjoy the day and make it one of your best. And may this season be fertile for you in whatever way you want it to be!

My father boiling down maple syrup in our woods, in the 1960's

WHY MAPLE SYRUP IS EXPENSIVE,  AND WHY IT’S WORTH IT

Few foods are as traditional and indigenous to North America as maple syrup. Native Americans in what is now the northeastern U.S. and southeastern Canada were making maple syrup long before Europeans arrived and by the late 17th century European settlers had already created a maple syrup industry.  Of course I knew none of this when I poured maple syrup on my pancakes as a kid, or occasionally helped my grandfather and father in gathering sap from the trees tapped in our woods. (More photos and a recipe for maple syrup gingerbread, after the jump.)

END_OF_DOCUMENT_TOKEN_TO_BE_REPLACED 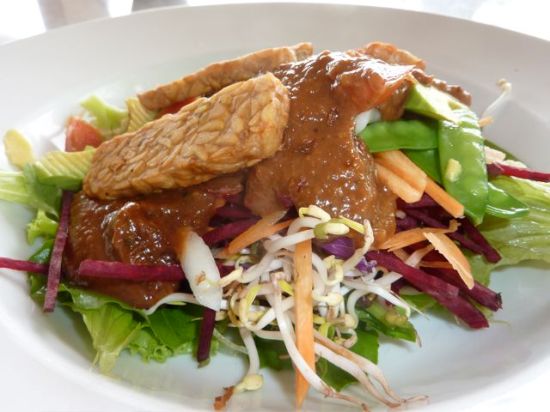 Photographer, adventure traveler and blog contributor Harley Shapiro has arrived in Indonesia on the last leg of his three-month sojourn through South Asia. His first stop is Bali which he last visited 30 years ago and  from where he sends these photos of Balinese food and life.  He also plans to visit the Indonesian islands of Lompoc and Gilli. View Harley’s Balinese photo gallery after the jump. (Above: gado gado salad with tofu, tempeh and peanut sauce.) END_OF_DOCUMENT_TOKEN_TO_BE_REPLACED 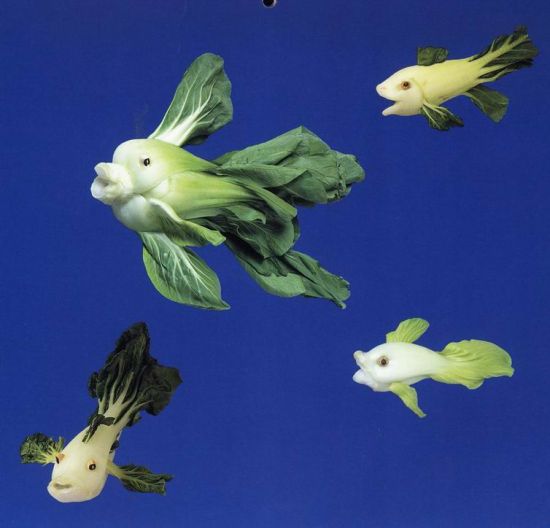 What do chefs do when they’re bored?  Carve a lot of whimsical creatures from fruits and veggies apparently.  And some other less innocent fun as well, no doubt.  After the jump, see a dozen more of these clever cut ups.  I wish I could, but I can’t take credit for these. Thanks to Chuck Collison for forwarding them from the net. END_OF_DOCUMENT_TOKEN_TO_BE_REPLACED

How farming has changed! Most of our food was once grown on small family farms like the one where I grew up.  Yes, the photo above is me, cultivating a soy bean field.  I appear to be about 16 years old, which would date the photo to c. 1960. This job took concentration, as you had to steer the tractor carefully between the rows to avoid running over the soy beans, while the cultivator dug up the soil to kill the weeds.  Later, we would “walk the beans,”  which involved walking up and down the field with a machete to whack out weeds growing within the rows. My brother John,  who farmed for many years, tells me that driving cultivators through the fields is pretty much history.  Most farmers now plant Monsanto’s genetically-modified Roundup Ready  seeds, then spray with Roundup, a popular herbicide.

As you can see, my relationship with soy beans is long-standing.  While it is now on the consumption end (miso, soy sauce, tofu), it began on the production side when I was oh so young.

Photographer and blog contributor Harley Shapiro is on a leisurely tour of Cambodia, exploring the country’s food and culture: everything from Angkor Wat to the local drag bar.  View a gallery of his photos here.

More Photos
the MacroChef
Create a free website or blog at WordPress.com.