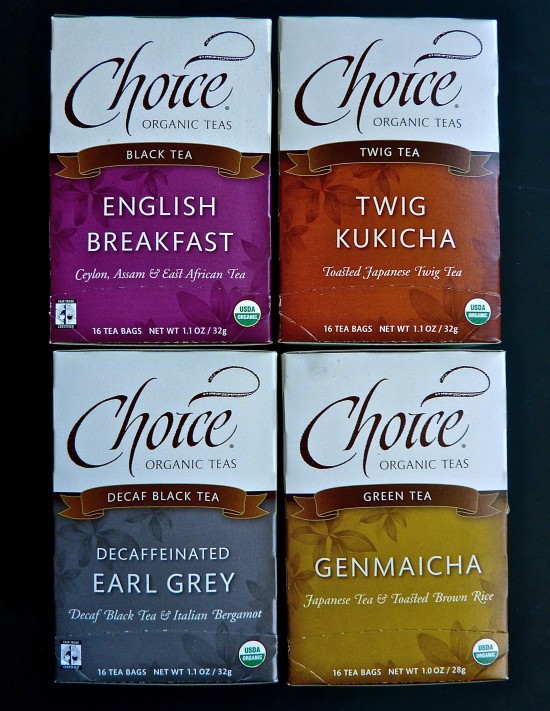 A month ago, slightly tongue in cheek, I wrote the first of  what I hoped would be a series of posts awarding gold stars to products which have, over time, proved to be of exceptional quality.  I say “slightly tongue in check”  because neither fame nor a monetary reward are likely to accompany my awards, but I promise you the products I highlight will be ones I wholeheartedly  endorse. Today’s Gold Star Award goes to Choice Organic Teas, a Seattle company whose ever-growing line of exclusively USDA-certified organic teas I’ve found to be consistently excellent.

Choice sources their white, black, green, chai and herbal teas from traditional tea growing areas in China, India and Japan, but also from less predictable places such as Tanzania, Brazil and South Africa. In the photo above, you see four of their teas which are favorites of  mine, and which happened to be in my tea drawer this morning. I particularly like their decaffeinated Earl Grey.  Some years ago I became enamored with Earl Grey tea, perhaps because its dense tea flavor is subtly enhanced with bergamot, a citrus fruit. Alas, I’ve discovered that the caffeine in full-on black tea is a little bit  too much. So, I’ve switched to Choice decaf Earl Grey which delivers as much flavor, but only a trace of caffeine. In fact, they are the only company in the U.S. to market an organic and Fair Trade Certified decaf Earl Grey. If you’re into avoiding caffeine altogether, try their herbal teas such as peppermint, ginger, chamomile and rooibos. These “teas” might more correctly be called herbal “infusions” since all true tea is harvested in one form or another from the family of Camellia sinensis plants.

While many natural food stores and even some supermarkets sell Choice teas, you can order from their full line by going to their online store, and I think you’ll find that compared to other high-end teas, their prices are reasonable. After the jump, there’s more information from their web site about the caffeine content of tea. If you know of a product worthy of a Gold Star Award, leave a comment to let me and our readers know.

Update: I’ve received word from Choice Organic Teas that to highlight World Water Day on March 22nd, during the month of March they will donate 20 cents for every box of tea sold from their web site to WaterAid, a nonprofit that works to bring clean water to communities worldwide which lack this basic necessity. Find more details about their program here, and to learn how you can contribute directly to this worthwhile program, go to the WaterAid web site.

END_OF_DOCUMENT_TOKEN_TO_BE_REPLACED 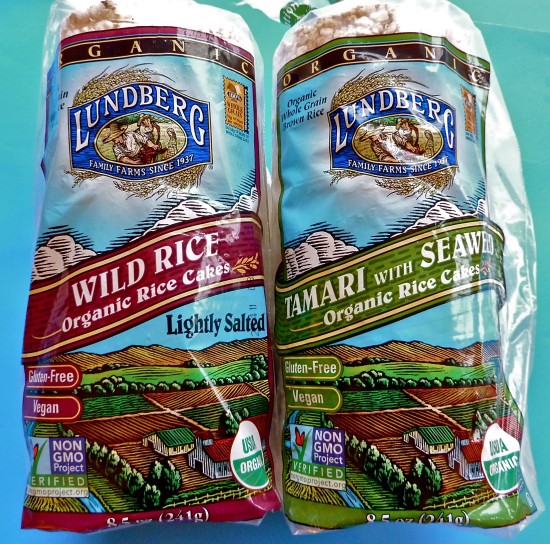 People tend to be of two persuasions when it comes to rice cakes. There are those who hold a belief that rice cakes look, taste and feel pretty much like styrofoam, and they are not about to be convinced otherwise.  Then there are those who, like myself,  just as firmly believe that rice cakes are the perfect snack when you want something less filling than bread, and lower in fat than chips.  To those of you on the styrofoam side of this argument, I say try Lundberg Organic Rice Cakes, they are truly so superior to all other rice cakes, that you just might change your mind.

Lundberg rice cakes have an inviting crunch, actually taste of the usually few and organic ingredients from which they’re made, and are produced by a family business known for decades of devotion to quality. And that’s why I’m citing them with the first MacroChef Gold Star Award for Excellence, an award I hope to give out occasionally to products of long-standing stellar quality. I’ve long admired Lundberg Farms. They’ve been growing rice organically since 1969 and were  the first farmers in the U.S. to grow and distribute brown rice on a substantial scale. Today, they grow or contract to grow 11,000 acres of organic rice, and 6,000 acres of what they call eco-farmed rice, which is grown to a higher standard than conventional commercially-grown rice. Because they control every step of the production process, they can insure quality from field to package and that’s why Lundberg rice cakes are a cut above all the rest, that and the fact that each cake contains almost twice as much rice as other brands. Some of their rice cake flavors do contain added sweetening, so if that’s a concern, stick to the more basic flavors such as Wild Rice, which contains only organic brown rice, organic wild rice and sea salt. The FAQ section of their web site is full of great information, including a chart which compares the nutritional profile of brown rice versus white rice (you’ll never want to eat white rice again!).

Rice cakes are a great blank slate for whatever topping you care to add, and anything you enjoy on toast works well, but one of the most delicious, and easy-to-make toppings is miso-tahini paté. My recipe is after the jump.  Enjoy! 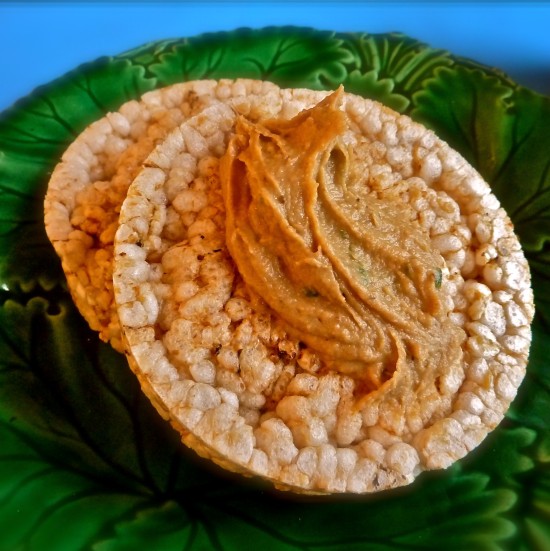