If there’s anything better than a Farmer’s Market to stimulate me to get into the kitchen and create a fresh, seasonal recipe, I can’t think what it would be. Warm weather and long sunny days have already descended on the Bay Area, and with that comes an abundance of early-season produce.  This morning I found leeks, garden peas, fava beans, green onions and shiitake mushrooms, all of which figure in this light, yet comforting udon noodle recipe. At my local Asian supermarket I picked up a package of fresh udon noodles. Using these precooked noodles makes an already easy dish go together even faster, and I find these noodles to be thicker and more succulent than noodles cooked from dry.  A caution: often these noodles come with a favoring packet full of weird ingredients–just toss it away! Start with a well-seasoned stock, and you’ll end up with a hearty, satisfying lunch or dinner. I’ve added only a little soy sauce, there’s no ginger or garlic or spice or oil, so the favor of the fresh vegetables, salmon and noodles really shines. And I think you’ll appreciate that this recipe requires only one pot, and comes together in under 30 minutes.  Happy Spring!  (Full recipe after the jump)

END_OF_DOCUMENT_TOKEN_TO_BE_REPLACED

We’re finally getting what we’ve needed for months here in Northern California, a dose of stormy, wet weather. The hills are turning fresh and spring green, at last. With drizzle coming down outside, I decided to warm up my insides with a bowl of udon noodles and vegetables in a rich miso broth. Although I usually recommend whole grain noodles (brown rice, whole wheat, buckwheat), I must confess that sometimes the allure of fat, wheaty udon calls to me. I especially like fresh udon noodles, because not only do they save time, but they seem to drink in the broth and become more succulent than dried noodles do. Of course, if you can’t find fresh udon noodles in your Asian or natural foods market, dried will do, as will linquine. In either case, you will need to take the extra step of cooking them separately according to package directions. I think you’ll love that this recipe begins like a stir fry, and then after water is added, becomes soup.  You could have this on the table in 20 minutes, and you need dirty only one pot: your trusty wok. If you live alone, as I do, I’ve scaled this recipe for you.  I ate a little more than half for dinner, and just finished off the rest for lunch. Perfect. It’s still raining outside and inside, I’m feeling warm and cosy. Recipe, after the jump.

END_OF_DOCUMENT_TOKEN_TO_BE_REPLACED

Blogger’s Note: Can it be that summer has returned already? O.K., technically it is still three weeks away, but really–today is June 1st, it must be summer.  A year ago I posted 101 menu ideas for summertime meals, and since most of you were not yet reading this blog then, I’m reposting them, hoping that you’ll find my list useful. Happy Summer!

Here is what I wrote then: Sometimes the hardest part of putting a meal together is just coming up with an idea of what to cook. Last fall I posted 101 menu ideas for Thanksgiving and the winter holidays, and now I’m doing a warm weather version.  There are ideas for soups, appetizers, salads, main dishes, side dishes and desserts. There are already recipes on this blog for a few of these suggestions (marked**). For others, I will, when I’m able, put up recipes for those most requested (leave a comment to let me know which items you’d  want a recipe for). Just to get us started, here’s a recipe for a Cool Soba Noodle Salad…During the summers I lived in Japan when it was just too hot and humid to eat warm, cooked rice, cold soba noodles got me through. I’ve been enamored of them ever since.  Here’s my, only slightly California-ized, version. (Recipe and 101 Summertime Menu Ideas after the jump…)

Photo: Soba Noodle Salad, one of 101 menu ideas for summer.

END_OF_DOCUMENT_TOKEN_TO_BE_REPLACED

I’ve just spent four days cooking for fifty friendly and appreciative women from the Center for Spiritual Living of San Jose who gathered at the Saratoga Springs Retreat Center. Among all the things I cooked, this rice noodle salad with a spicy peanut dressing rated as one of their favorites. While clearly Asian, it’s hard to say whether this recipe is more Chinese, Vietnamese, Indonesian or Thai–perhaps it’s a bit of each. Although white rice noodles are an Asian staple, I’m suggesting you upgrade nutritionally by using brown rice spaghetti, which you’ll find at Trader Joe’s, and very likely at your local supermarket as well. Serve this as a side dish, or make it a light entree by adding a few ounces of seasoned tofu or tempeh, or whatever protein you fancy. Make plenty, because these noodles are so much fun to eat, I’m betting that even your skeptical non-vegetarian friends are going to want seconds (full recipe after the jump).

END_OF_DOCUMENT_TOKEN_TO_BE_REPLACED 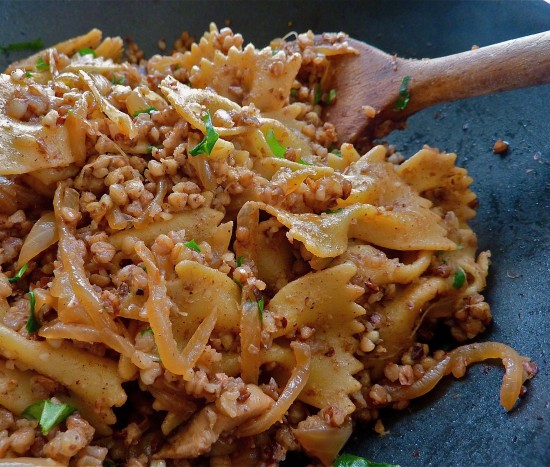 Maybe you need to have grown up in some wind-swept northern clime to fully appreciate the hearty, warming quality of buckwheat (if it isn’t a necessity, I’m pretty sure it helps). You won’t be surprised to learn that Russia grows more buckwheat than anyone else, with China second, and Ukraine third. While in East Asia, buckwheat is most often consumed as a noodle (think Japanese soba noodles), in Western Europe and North America we know buckwheat best as an ingredient in pancakes and crepes. But it’s the whole grain buckwheat groats of Russia and Eastern Europe that I want to celebrate today. Buckwheat’s ability to thrive in poor soil and a short growing season endeared it to our Eastern European ancestors, many of whom likely would have starved without it. It’s peasant food, pure and simple, but nutritiously rich in iron and a balanced concentration of all essential amino acids.

Immigrants from Russia, Poland and other Slavic countries, many of them Jewish, brought buckwheat to the U.S. From the 1880’s to the 1920’s, tens of thousands of these folk settled in New York’s Lower East Side, where I lived in the late 60’s. It was in one of that neighborhood’s thriving Jewish dairy restaurants where I first encountered kasha varnishkes, the Yiddish name for a much-loved dish which consists of little more than buckwheat groats, bow tie noodles and onions. The dish’s simplicity invites variations–some versions calling for eggs or chicken stock, or a rich gravy on top. These days, kasha varnishkes is mostly served as a side dish, but doubtless during times of scarcity, it was the entire meal. My vegan version sticks close to the pared down original, with only the addition of mushrooms.  So, some chilly day, eat like our ancestors ate, bring the past into the present and cook up a warming batch of kasha varnishkes (recipe after the jump).

END_OF_DOCUMENT_TOKEN_TO_BE_REPLACED 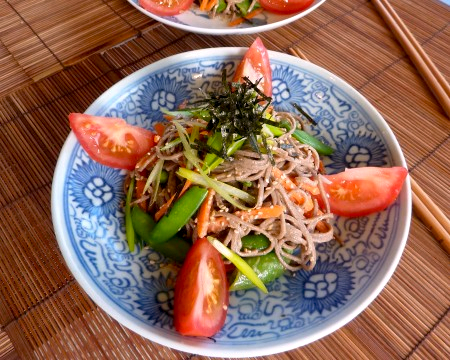 Sometimes the hardest part of putting a meal together is just coming up with an idea of what to cook. Last fall I posted 101 menu ideas for Thanksgiving and the winter holidays, and now I’m doing a warm weather version.  There are ideas for soups, appetizers, salads, main dishes, side dishes and desserts. There are already recipes on this blog for a few of these suggestions (marked**). For others, I will, when I’m able, put up recipes for those most requested (leave a comment to let me know which items you’d  want a recipe for). Just to get us started, here’s a recipe for a Cool Soba Noodle Salad… END_OF_DOCUMENT_TOKEN_TO_BE_REPLACED