It’s often said that we eat with our eyes. And that’s true enough, but if it were entirely true, wouldn’t we be devouring beets, with their luscious deep magenta hue, much more than we do? As for me, when I’m craving a vegetable, beets are seldom at the top of my list. And yet, I do enjoy roasted beets in a salad, or a hearty beet borscht soup, or crisp pickled beets. With their dominant flavor and color, beets are not as widely useful as say, carrots, but cast in their proper role, they can be very good indeed.

Historically, beets seem to have originated in the Mediterranean region, and culturally they are most associated with the cuisines of central and east Europe. Botanically, beets are in the same family as chard, spinach and quinoa. Nutritionally, they uniquely contain betalains, which are thought to be strong antioxidants. Members of this family also may contain oxalates, which in large quantities, for some people may inhibit calcium absorption. Generally though, for most people, the health benefits of eating members of this family are believed  to far outweigh the risks. For maximum nutritional benefit, dice the beets and steam them for about 15 minutes, serve with your favorite light dressing. And if you find beets with tender, fresh stems and leaves still attached, those are highly edible as well. Cook as you would other green vegetables.

As for this recipe, I’d never made pickled beets before and because I’d put them on the menu for our Monday night dinner last week, I had no choice but to come up with a recipe. Procrastinator that I am, I waited until the last minute to make these pickles. Hence the word “quick” in the title. And thus was born a recipe for pickles which can be made in 24 hours.  You may quibble that these beets are more “marinated” than “pickled,”and you might be right. If you have time to leave them in the pickling brine for several days, they’ll probably be even better. Use red beets, or a combination of red and golden beets as I did. In either case, the colors will be spectacular. Recipe, after the jump.

END_OF_DOCUMENT_TOKEN_TO_BE_REPLACED 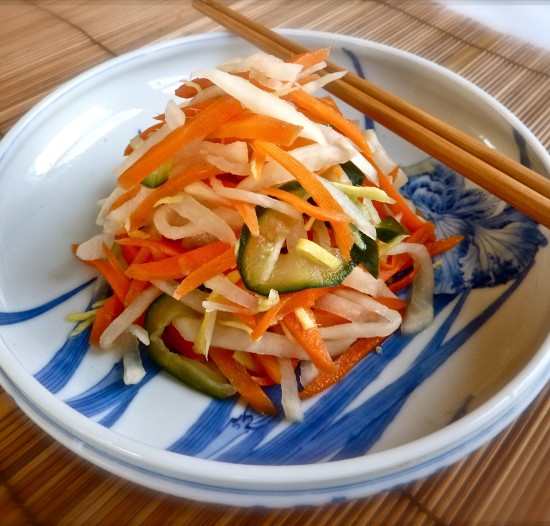 While pickling can take weeks, if not months, it’s also true that light, crisp pickles can be made in hours. You could eat these Chinese-inspired pickled veggies after only a few hours in the brine, but I think you’ll enjoy them more if you let them rest over night. Pickling, of course, refers to the process of preserving food in salt or acidic brine, thus achieving a pH of less than 4.6, enough to kill most bacteria. Before the invention of canning, freezing and refrigeration, pickling allowed people who lived in cold climates to enjoy vegetables throughout the winter. And pickling is still a great way to prepare vegetables, as once they’re made, they rest in your fridge, always ready to eat. Truly, a healthy fast food.

If you’re worried about the salt content in homemade pickles, keep a couple of things in mind: salt is necessary as a preservative and for that traditional “pickled” taste. Also remember that much of the salt stays in the brine (which you won’t be eating), and that pickles are meant to be eaten in small quantities. They are always a condiment, never the main event. Rinse pickles under running water before eating, if you want to further reduce their saltiness. If covered by brine, these pickles will keep safely in the fridge for 2-3 weeks.

This is a basic recipe. Vary it by using other seasonal vegetables, heat it up with pepper of some kind, if you like, or add herbs and spices. Enjoy with rice or noodles, and pickles are a great addition to most any sandwich. Recipe, after the jump.

Veggies I used in these pickles: daikon, carrot, cucumber, ginger and garlic. You could also pickle celery, turnip, bell peppers or other seasonal vegetables in the same way.