As some of you know, I’m in the middle of my annual visit to Minnesota. I’m spending ten days with family and friends, and mostly with my 89-year-old mother. Although I’m on vacation, I can’t help noting the status of Minnesota’s food culture.  Two years ago, in my first blog post, I wrote about the notorious food-on-a-stick at the Minnesota State Fair. I didn’t visit the fair this year, but I did check out something which gives me a lot of hope, and that is Minnesota’s vigorous food co-op movement.

Co-ops (short for co-operatives) were brought to Minnesota by northern European immigrants in the 19th Century and thrived well into the 20th. Co-ops are businesses owned by their customers, who buy shares and either receive a discount on purchases or a percentage of the profits, and are usually governed by an elected board of directors. Fifty or sixty years ago, it wasn’t unusual for small Minnesota towns to have a co-op gas station, creamery, grocery store, even a general merchandise store. As those co-ops declined, a new style of co-op, inspired by the alternative culture movement, sprang up all around the country, really, but these new co-ops seem to have endured especially well in Minnesota.

Needing to shop for dinner, my mom and I headed to the new and nearby St. Peter Food Co-op. St. Peter is a college town of fewer than 10,000 people deep in Minnesota farm country, but this market is one any sophisticated urban neighborhood would be happy to claim. I was thrilled to see how roomy, well-stocked and beautiful a store it is.

The St. Peter Food Co-op first opened as an all-volunteer, storefront business in July of 1979. It expanded about ten years later, survived a horrendous tornado which hit the town in 1998 and moved into its present site this past April. The co-op raised $900,000 in new and renewed memberships and received a loan guarantee from the U.S. Department of Agriculture to finance the more than $3 million it took to buy and renovate a sixty-year-old auto dealership into a stylish natural foods supermarket. Although the store sells a wide range of goods, they feature local and organic foods as much as possible and have some 500 items in bulk. I was impressed to see an attractive deli, salad bar, in-house bakery, and inside and outdoor seating.  In short, I wish this store were in my neighborhood!

What is perhaps more impressive is that this is just one of more than forty food co-ops in Minnesota, ranging from the Wedge in Minneapolis which operates its own organic farm (and where I used to shop), to the Countryside Co-op in tiny Hackensack (population 313) in north central Minnesota. I’m heartened to see that this healthy food movement is not confined to hip, urban enclaves, but is spread throughout the state. As depressed as I sometimes get about the state of America’s food and health, I am immensely cheered to see how people here in Minnesota are working to create healthy soil, nourishing food and meaningful work. To everyone involved in this movement, I say a hearty thank-you and best wishes for a bright future!

END_OF_DOCUMENT_TOKEN_TO_BE_REPLACED

On the day before Halloween, an array of pumpkins and squash.

I’ve just returned from a ten-day stay with family and friends in Minnesota, and I plan to write several posts about what’s happening in the gopher state, where I spent 25 years of my life. Yesterday, my friend Roger Haase took me on a tour of St. Paul’s justifiably famed downtown Farmer’s Market which dates back 150 years. In its present location at 290 East 5th Street since 1982, the market has 167 stalls and operates on weekends year around, with a smaller winter market open December through April. Because everything must be grown or made in Minnesota and nearby Wisconsin, the market is a good gauge of what Minnesotans are growing and eating.  I almost always feel uplifted when I visit a Farmer’s Market, and yesterday was no exception.  It’s invigorating to be in the company of people who work so hard to produce beautiful food. You don’t get rich doing this sort of work, so you know that they value something else. Minnesota’s once meat-and-potatoes cuisine has in the past few decades been enlivened by immigrants from many countries, but most notably Viet Nam, Mexico, Somalia, and by Hmong people from Southeast Asia, who, as truck farmers, play a large role in the market. It must be said also, that because of global warming, or for whatever reason, Minnesota’s climate is now not as harsh and unforgiving as I remember it to be.  Frankly, I was surprised to find as wide a variety of locally-grown produce (even tomatoes) so late in the season. See more photos of what I found at the market after the jump. 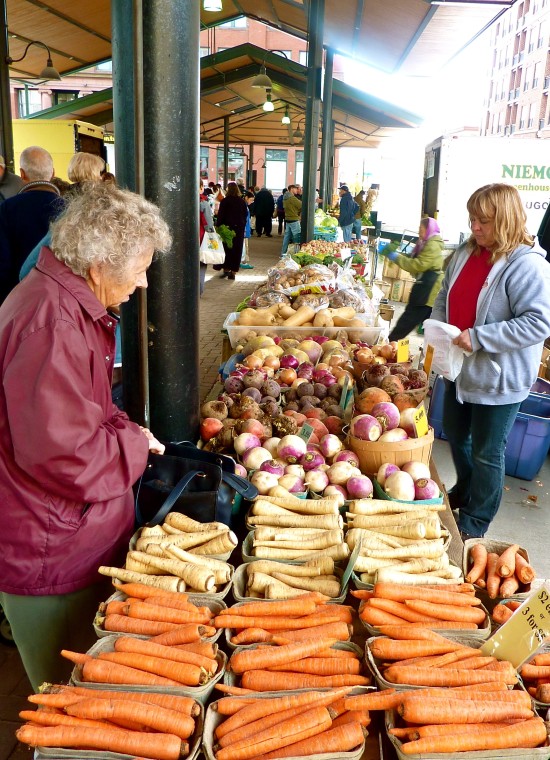 Creative marketing was much in evidence, a basket of gourds and Indian corn.

Wisconsin cranberries. Tell me honestly, did you even imagine that they grew cranberries in Wisconsin? More photos of the market, after the jump...