Three years ago I posted a dozen or so images digitized from 35 mm colored slides my father made in Southern California in the 1940’s. Those photos were viewed by far more people than anything ever on MacroChef, and a number of commentators asked if there might be more. Having looked through hundreds of slides, I’ve found another batch of photos evocative of that long ago time and place. I hope you enjoy them.

Photos: Top, a day at Santa Monica Pier, a destination for fishing and amusements since 1909, and more recently, also a historical landmark.  Above: Los Angeles Union Station, built in 1939 in a modernized Mission revival style, is still in use today. Amtrak, commuter rail, and Los Angeles’ new subway lines combine to make it the busiest rail station on the West Coast. (Click on any photo to enlarge it)

My parents, newlyweds posing in their living room c. 1942. From our vantage point more than 70 years later, the furniture, the clothes and the hairstyles look fabulous, it seems to me.

Here they are lounging in front of their little cottage on Linda Rosa Avenue in Pasadena (and long since torn down). My parents, both Minnesotans, lived here during World War II, from 1941 to 1945.  They worked in war industries until my father was drafted into the Navy and sent to Great Lakes Naval Base near Chicago for basic training and my mother returned to live with her parents in Minneapolis. 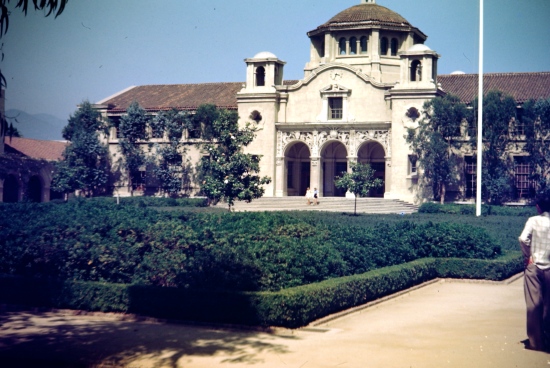 The iconic architectural style for old-time southern California buildings is, of course, Mission revival, sometimes described as Spanish/Mediterranean.  This ornate building surely fits somewhere in that tradition. I wish I knew what it was.  A google search turned up nothing. Any suggestions?  Later note: George Johnston, one of our readers, has identified this as Throop Hall, one of the early buildings at Caltech. Regrettably, it has been torn down, apparently due to earthquake damage.  Read more about it here: https://eands.caltech.edu/memories-of-throop/

Day at the beach, with the Santa Monica Pier in the background, in 1947. 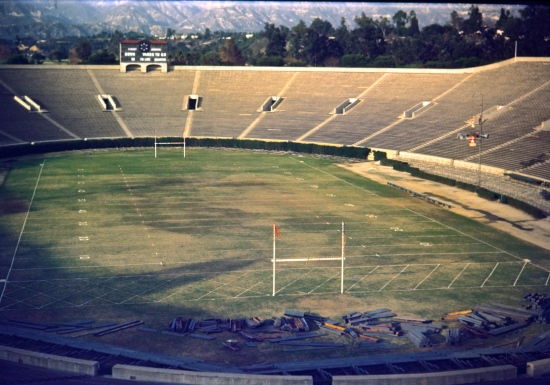 Most famous landmark in Pasadena is, of course, the Rose Bowl. And the most iconic event in Pasadena is the Tournament of Roses parade held every year on January 1st. My parents missed out on the parade because it was suspended due to WWII during the years they lived in Pasadena.

Hollywood mansion, likely a movie star’s home. Does anyone know if this house still exists? Update: a reader informs me that this is the Wrigley Mansion on Orange Grove Blvd. in Pasadena, which is now used for the Tournament of Roses headquarters.

My father views L.A., with detritus from a studio backlot immediately below, a golf course in the middle distance and what appears to be another film studio in the distance. Photos in which my Dad appears were most  likely taken by his brother, Gilbert Alinder. Gil was an even more dedicated photographer than my father. 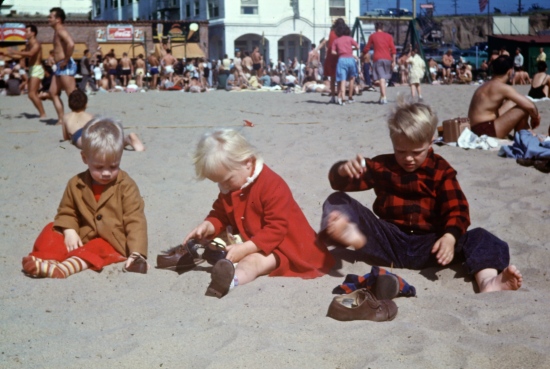 Kids play in the sand at world famous Venice Beach in 1947. 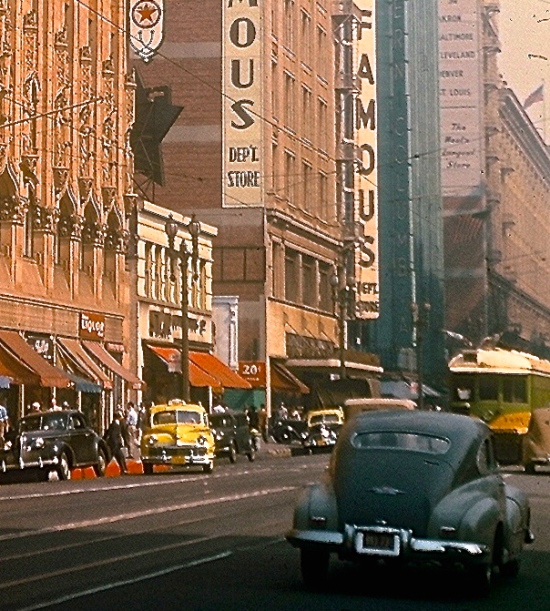 This is a detail of a photo which appeared in the first set of photographs: Broadway in downtown L.A. I love the 40’s vintage cars, and seeing the long-gone L.A street cars. 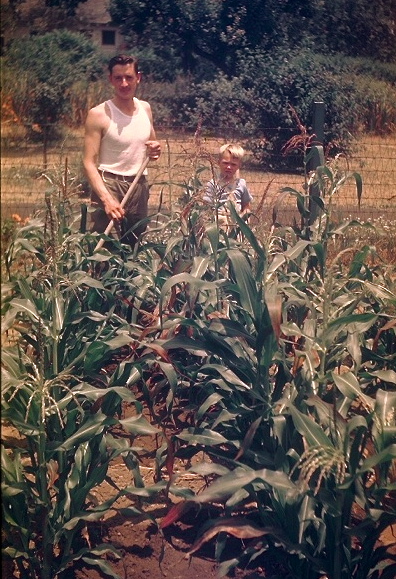 Victory gardens were a big deal during WW II, and here is my father’s effort. Given that he loved sweet corn–well, you can see what he tried to grow. My mother reports that the results weren’t very good. The soil apparently was not well suited to my dad’s favorite crop. 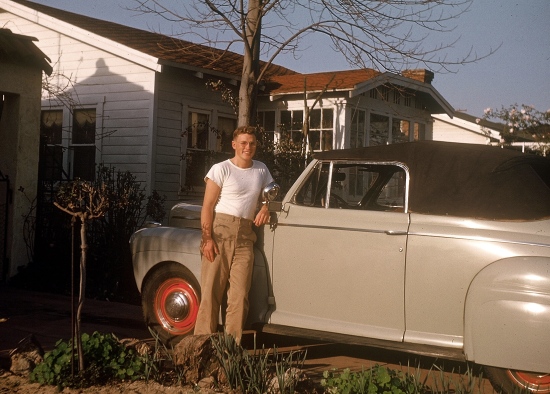 I’ve no idea who this nice looking fellow is, but he must have been a good friend of my parents, posed as he is, leaning against their Ford convertible in 1947.