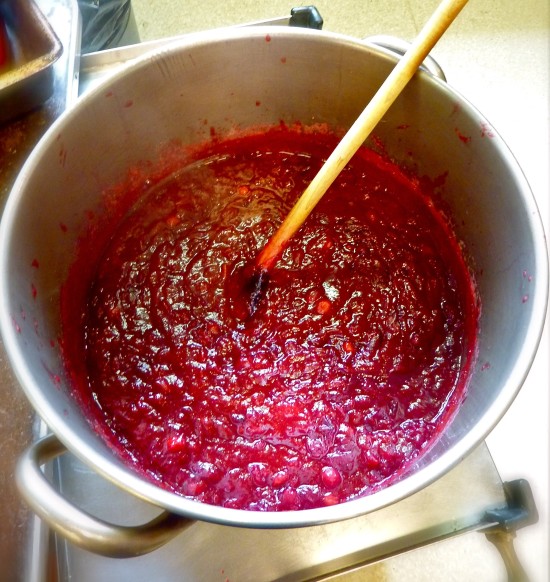 James made this huge pot of cranberry sauce. Is it enough to feed 120, we wondered. Turns out it was. Later, we stirred in sliced kumquats which we'd candied in maple syrup.

Since I’ve been blogging, my camera has become another of the tools I bring with me wherever I go to cook. Last Monday was no exception, as I hoped to capture a feel for what goes on behind the scenes in preparing our Monday Night Dinner Thanksgiving meal. Our Monday-before-Thanksgiving celebration is likely to be both the meal with the greatest number of dishes and the largest attendance of all the meals in a year. In short, there is the potential for stress! As usual, things started out well, and I got a number of shots of the early stages of prep, which I share with you here.  Later, also as usual, things got more intense, and I had to put away the camera and devote 100 per cent of my attention to cooking.

As you might imagine, a meal like this takes some planning. Two months ahead of time, James Holloway, our other Monday night chef, and I hash out the menu.  A week ahead, we divide up the menu, deciding who will be responsible for purchasing and preparing each dish. I bought the pie ingredients on Friday, and spent most of Sunday preparing the pies and the tofu cream. Monday morning I was up early, left my home shortly after 9 and made it to Berkeley Bowl, which was in full pre-Thanksgiving madhouse mode, to do my half of the shopping.  By noon I was pulling up in front of the First Baptist Church, our dinner venue. James was already on site, and had the cranberry sauce nearly done. Later, Paul Schmitt, who regularly serves as our prep cook and pot washer, joined us. He did a heroic job of frying our croquettes on the griddle, among other tasks. And thankfully, Jeff Coate, who volunteers occasionally, also came by to help out. We put him to work trimming the green beans and making up the croquettes (we welcome kitchen volunteers who are willing to pitch in and do whatever needs to be done). It was a real team effort and by 6:30 everything was done, and only the clean-up remained.  We have been working together so long, we are like that proverbial well-oiled machine.  It’s a lot of work, but because we like each other and get on well, it’s also a pleasure.  I should add, that it really does take a village to put on a community dinner like ours.  It only happens because of the faithful work, year after year, of our volunteers, supervised by dinner manager, Ilona Pollak.  In a future post, I hope to highlight what they all do. In case you missed it, yesterday’s post shows and describes in detail everything we made. All in all, it was a lovely evening. 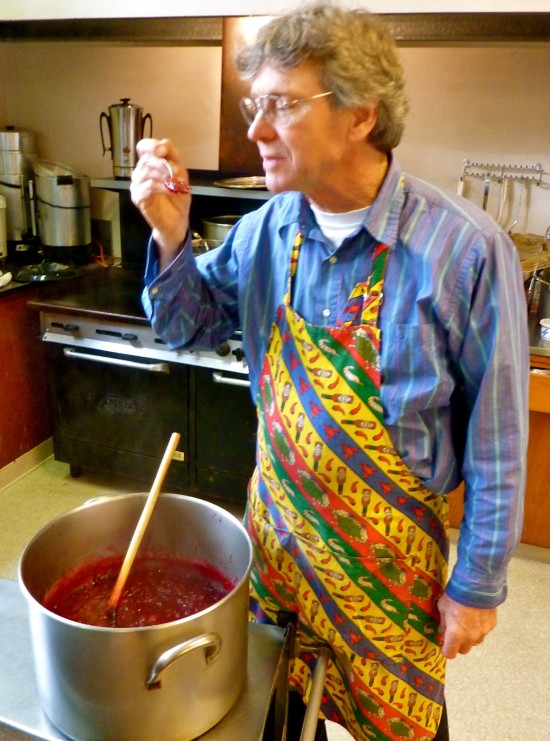 James gives the cranberry sauce a final taste (more photos after the jump). 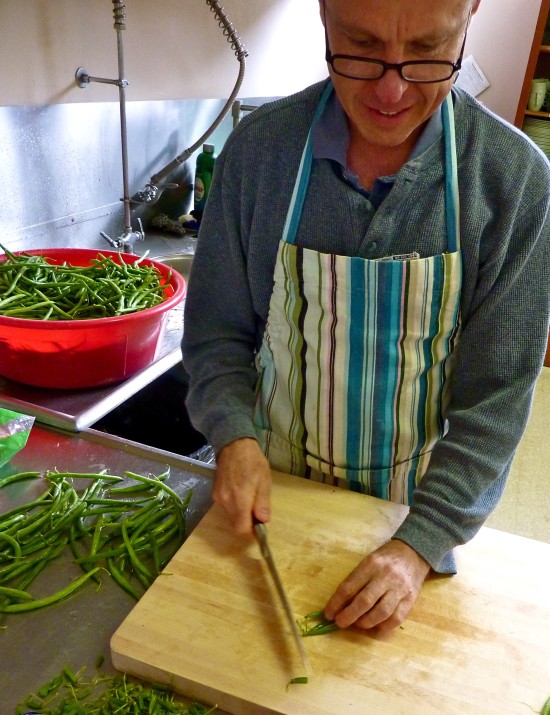 Jeff trims the stem ends off a mound of green beans. 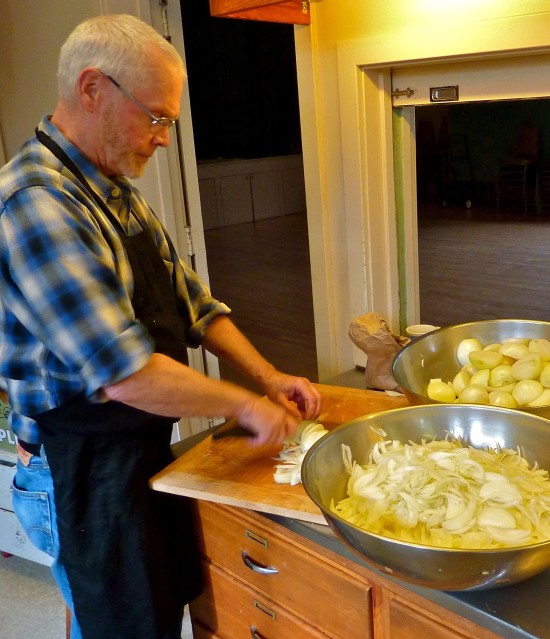 Gary (that's me) chops 20 pounds of onions for the soup. 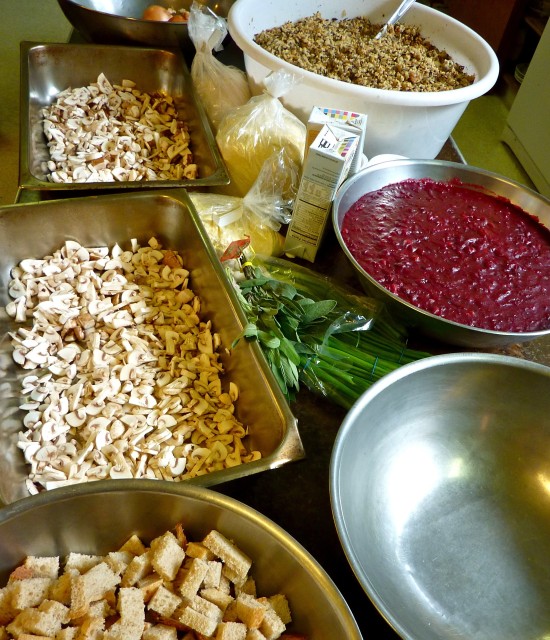 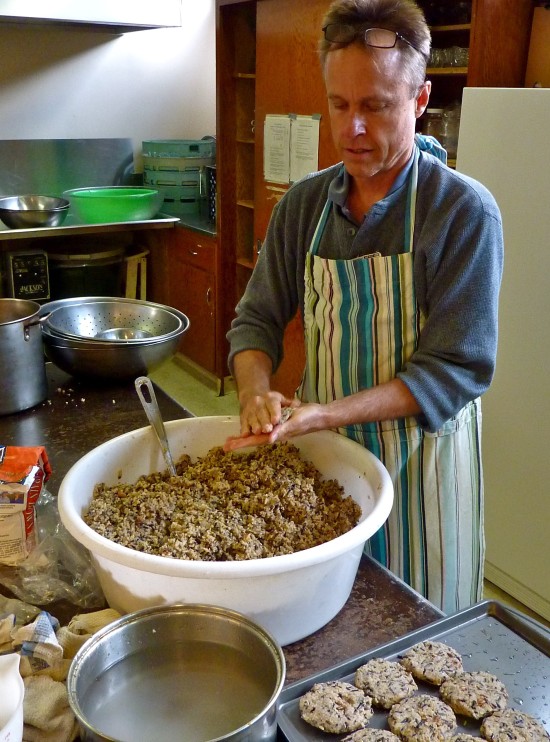 Jeff moves over to start forming the wild rice mixture into croquettes. We would end up making 126 of the little buggers! 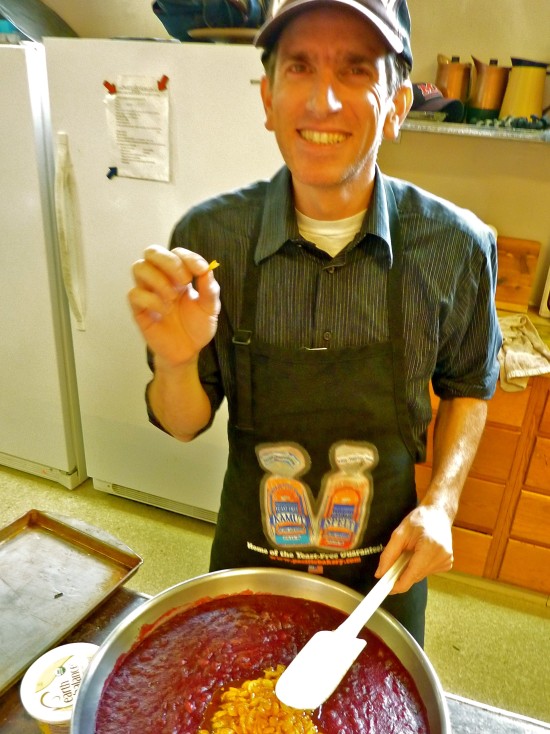 Paul about to taste test one of the candied kumquats before mixing them into the cranberry sauce. 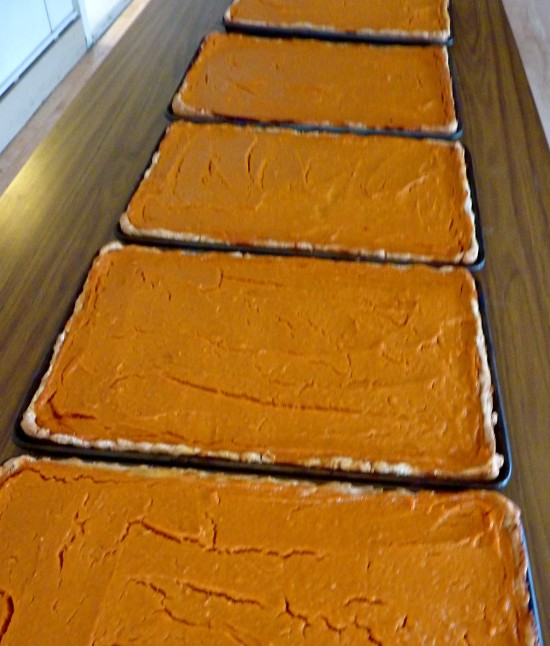 Five large pumpkin pies waiting to be cut. I spent 5-6 hours on Sunday making these, and the filling is about 70% butternut squash and 30% garnet sweet potatoes. 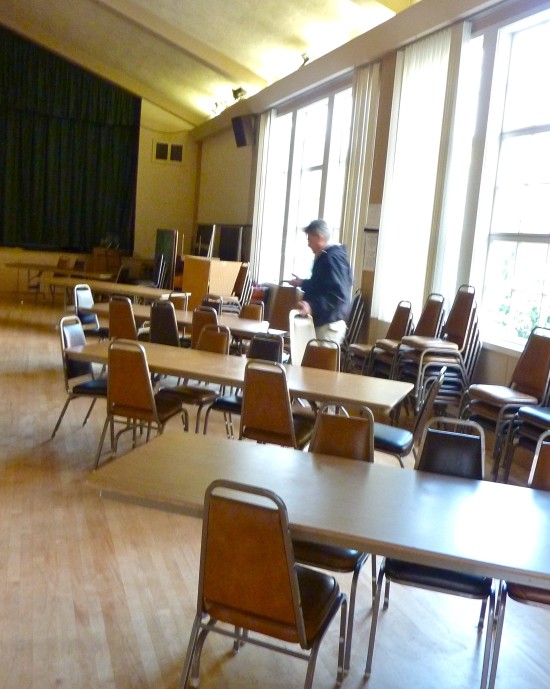 Meanwhile, Bob sets up tables and chairs in the dining room. Later, Ilona and her crew will come to decorate the tables, make take-outs, and a thousand-and-one other tasks, but that's a story for another day. 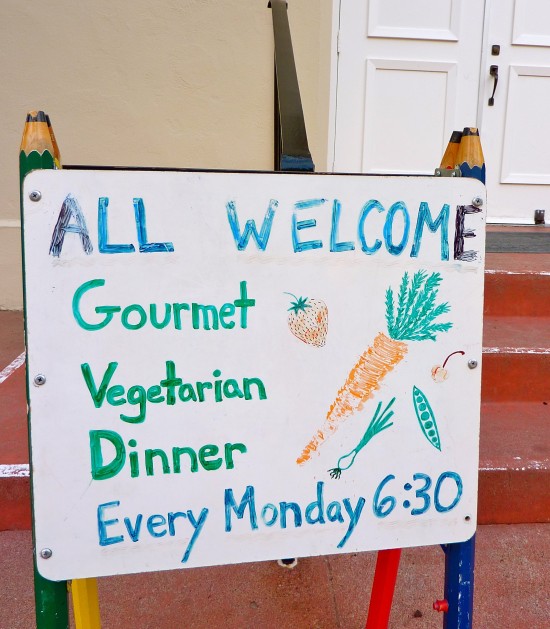 If you're ever strolling past a church in Palo Alto and you see this little sign, come on in. The people are friendly and the food is fine.